Grab one of your favourite Graphic Novels from The Works. We have a great range of anime, fantasy and other graphic novels from a wide range of authors. Just use the filters below to find the perfect novel for you.
Edit Filters 1 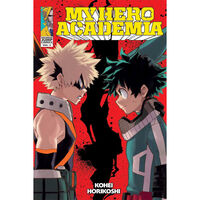 Getting into U.A. High School was difficult enough, but it was only the beginning of Izuku's long road toward becoming a superhero. The new students all have some amazing powers, and although Izuku has inherited All Might's abilities, he can barely control them. Then the first-year students are told they will have to compete just to avoid being expelled! Product Information: • ISBN: 9781421582702 • Author: Kohei Horikoshi • Publisher: Viz LLC • Format: Paperback • Pages: 208 • Dimensions: 19.05 x 12.7 x 1.52 cm 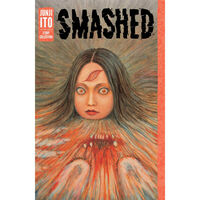 Thirteen chilling nightmares, presented by the master of horror. Try not to be noticed when you eat the secret nectar, otherwise you’ll get smashed… What horrific events happened to create the earthbound—people tied to a certain place for the rest of their short lives? Then, a strange haunted house comes to town, but no one expects it to lead to a real hell… Welcome to Junji Ito’s world, a world with no escape from endless nightmares. Product Information: • ISBN: 9781421598468 • Author: Junji Ito • Publisher: VIZ Media • Format: Hardback • Pages: 416 • Dimensions: 20.96 x 20.96 x 14.61 cm 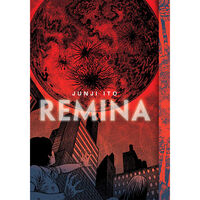 Another of Junji Ito's classics, the sci-fi masterwork Remina tells the chilling tale of a hell star. An unknown planet emerges from inside a wormhole, and its discoverer, Dr. Oguro, christens the body “Remina” after his own daughter. His finding is met with great fanfare, and Remina herself rises to fame. However, the object picks up speed as it moves along in its curious course, eliminating planets and stars one after another, until finally Earth itself faces extinction… Is the girl Remina the true cause of the catastrophe? A masterwork of horror from Junji Ito, unfolding on a universal scale. Product Information: • ISBN: 9781974717477 • Author: Junji Ito  • Publisher: VIZ Media  • Format: Hardback • Pages: 256 • Dimensions: 20.96 x 14.61 x 2.03 cm 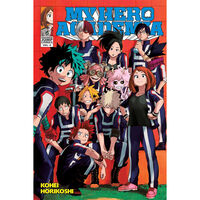 My Hero Academia Volume 4: The Boy Born with Everything

The U.A. High sports festival is a chance for the budding heroes to show their stuff and find a superhero mentor. The students have already struggled through a grueling preliminary round, but now they have to team up to prove they're capable of moving on to the next stage. The whole country is watching, and so are the shadowy forces that attacked the academy... Product Information: • ISBN: 9781421585116 • Author: Kohei Horikoshi • Publisher: Viz LLC • Format: Paperback • Pages: 192 • Dimensions: 19.05 x 12.7 x 1.78 cm 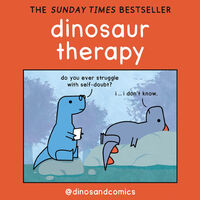 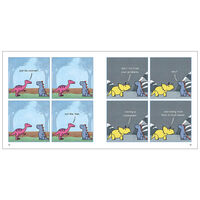 A comic about dinosaurs navigating the complexities of life, together. The book includes exclusive, never-seen-before, bonus comics, a wistful, honest and highly relatable account of modern life. Dinosaur therapy is a book of cartoons for grown-ups. In the comic, dinosaur characters grapple with questions around the meaning of life and mental health, trying to make sense of the world and cope with their own place in it. Product Information: • ISBN: 9780008472818 • Author: James Stewart  • Publisher: Harper Collins • Format: Hardback • Pages: 144 • Dimensions: 15.2 x 15.2 x 1.5cm 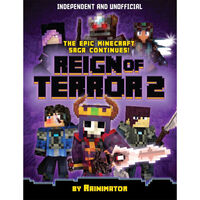 Return to Rainimator's amazing land of epic fantasy with the second part of the Reign of Terror series. Based on the hit animated YouTube animations with over 1 million subscribers, this independent and unofficial title continues the battle. Witness the daring rescue of the Dragon Tamer, see him go head to head with a coven of magic-wielders, and even revisit some of the amazing battles of the first book for a whole new perspective. For lovers of Minecraft, magic and sword-and-sorcery stories, this is the ideal thrilling read. Product Information: • ISBN: 9781839351327 • Author: Eddie Robson, Rain Olaguer • Publisher: Welbeck Publishing • Format: Paperback • Pages: 96 • Dimensions: 19.05 x 24.61 cm 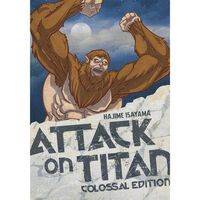 In this post-apocalyptic sci-fi story, humanity has been devastated by the bizarre, giant humanoids known as the Titans. Little is known about where they came from or why they are bent on consuming mankind. Seemingly unintelligent, they have roamed the world for years, killing everyone they see. For the past century, what's left of the human race has hidden in a giant, three-walled city. People believe their 100-metre-high walls will protect them from the Titans, but the sudden appearance of an immense Titan is about to change everything. Product Information: • ISBN: 9781632364647 • Author: Hajime Isayama • Publisher: Kodansha Comics • Format: Paperback • Pages: 944 • Dimensions: 52 x 22.9 x 4.3 cm 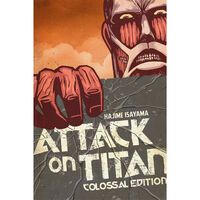 THE COLOSSAL EPIC BEGINS! For eons, humans ruled the natural world. But a century ago, everything changed when the Titans appeared. Giant, grotesque parodies of the human form, these sexless monsters consumed all but a few thousand human beings, who took refuge behind giant walls. Today, the threat of the Titans is a distant memory, and a boy named Eren yearns to explore the world beyond the wall. But what began as a childish dream will become an all-too-real nightmare when a Titan finally knocks a hole in the wall, and humanity is once again on the brink of extinction. Product Information: • ISBN: 9781612629711 • Author: Hajime Isayama • Publisher: Kodansha USA Publishing • Format: Paperback • Pages: 970 • Dimensions: 26.59 x 17.7 x 4.19 cm 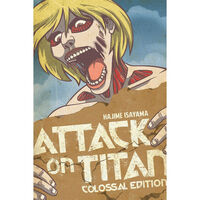 Contains Vol. 6-10 of Attack on Titan in an extra-large size, on premium-quality paper! Also includes an exclusive look at Isayama's design work, and an eight-page color crossover with the superheroes of Marvel's Avengers! The megahit Attack on Titan anime finally returns, streaming on April 1! FACING A NEW TERROR After helping the Garrison to victory, retaking Trost District from the Titans, Eren awakens in a prison cell. He may be a hero to the common people, but among the leaders of humanity, fear of Eren’s mysterious powers threatens his continued survival. It’s only the insistence of the tenacious and pragmatic Erwin Smith, leader of the Survey Corps, that wins Eren a chance: Prove himself outside the Walls, and bring the evidence from his family home back from Titan territory, and the rest of the military will let him live. Product Information: • ISBN: 9781632361813 • Author: Hajime Isayama • Publisher: Kodansha USA Publishing • Format: Paperback • Pages: 968 • Dimensions: 26.92 x 18.03 x 4.32 cm